Transport for London (TfL) has set out plans to reduce road danger to people on Peckham High Street, helping the area become more welcoming for people on bikes and on foot and making it easier to access Rye Lane and Peckham Town Centre.

Road danger along Peckham High Street is unacceptably high, with the tragic deaths of three people walking there since 2015. The proposals include the lowering of the speed limit to 20mph, supported by clear evidence that shows lowering speeds saves lives. A safer road layout is also needed to reduce road danger and to make the area more welcoming and accessible for people on foot.

TfL is inviting people to have their say on the changes before 12 March at tfl.gov.uk/Peckham-town-centre. Construction work could begin by the end of the year, depending on feedback received during the consultation. 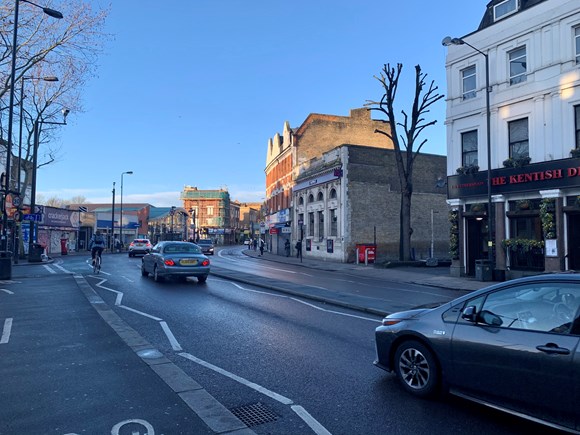 The proposed upgrades would be the first phase of TfL’s plans for the area, with changes to the junction of Peckham High Street and Peckham Hill Street set to follow after further design work. TfL continues to work on proposals to make cycling safer and improve bus services between Oval and Deptford, which would include changes in the Peckham area.

Penny Rees, TfL’s Head of Healthy Streets Investment and Delivery, said: “Our proposals for Peckham High Street would make a real difference to Peckham Town Centre, not only making roads safer but also making it easier to get around on foot. We really value feedback from the local community, so I’d encourage everybody to have their say.”

Cllr Richard Livingstone, Southwark Council’s Cabinet Member for Environment, Transport and the Climate Emergency, said: “We are happy to see road danger on Peckham High Street being addressed. TfL’s new public consultation offers a number of measures that will help keep people safe and we are keen to hear what local people make of their suggestions. I would encourage residents to ensure that their voice is heard, by responding to the consultation and I look forward to seeing solutions agreed upon and implemented as quickly as possible.”

TfL is committed to eliminating death and serious injury from London’s streets as part of its Vision Zero approach to road danger. The Mayor’s Transport Strategy aims to reduce reliance on cars and grow sustainable travel, aiming for 80 per cent of journeys to be made by walking, cycling or public transport by 2041. TfL’s investment is creating healthy streets where people choose to walk, cycle and take public transport, connecting communities, improving air quality and reducing road danger and noise.

TfL research shows improvements to make walking and cycling more appealing in London’s town centres and high streets leads to a 93 per cent increase in people walking in the streets. The research has also found that people walking, cycling and using public transport spend the most in their local shops, spending 40 per cent more each month than car drivers.