London, September 25th 2020 – Londoners are increasingly looking for work outside the capital as the city’s jobs market takes longer to recover from the pandemic than anywhere else in the UK, according to new data released by the world’s largest job site, Indeed.

Indeed analysed searches made on its platform by London-based jobseekers, and found that the number seeking jobs outside the capital in August surged by 30.5% compared to the start of the year. Taking out seasonal factors, the figure was still 27.2% higher than it was in August 20191.

A sharp fall in the number of job vacancies in the capital may be partly behind this trend. On September 18, the number of London-based jobs posted on Indeed was 54.6% down on the same time last year, and barely above the low point of -56.9% in early June2.

While all UK regions have seen overall vacancies decline since COVID-19 hit in March, the number of listings outside the capital is picking up. By contrast, London’s jobs market is further adrift from its pre-pandemic level than any other in the UK, and its recovery has flatlined3. 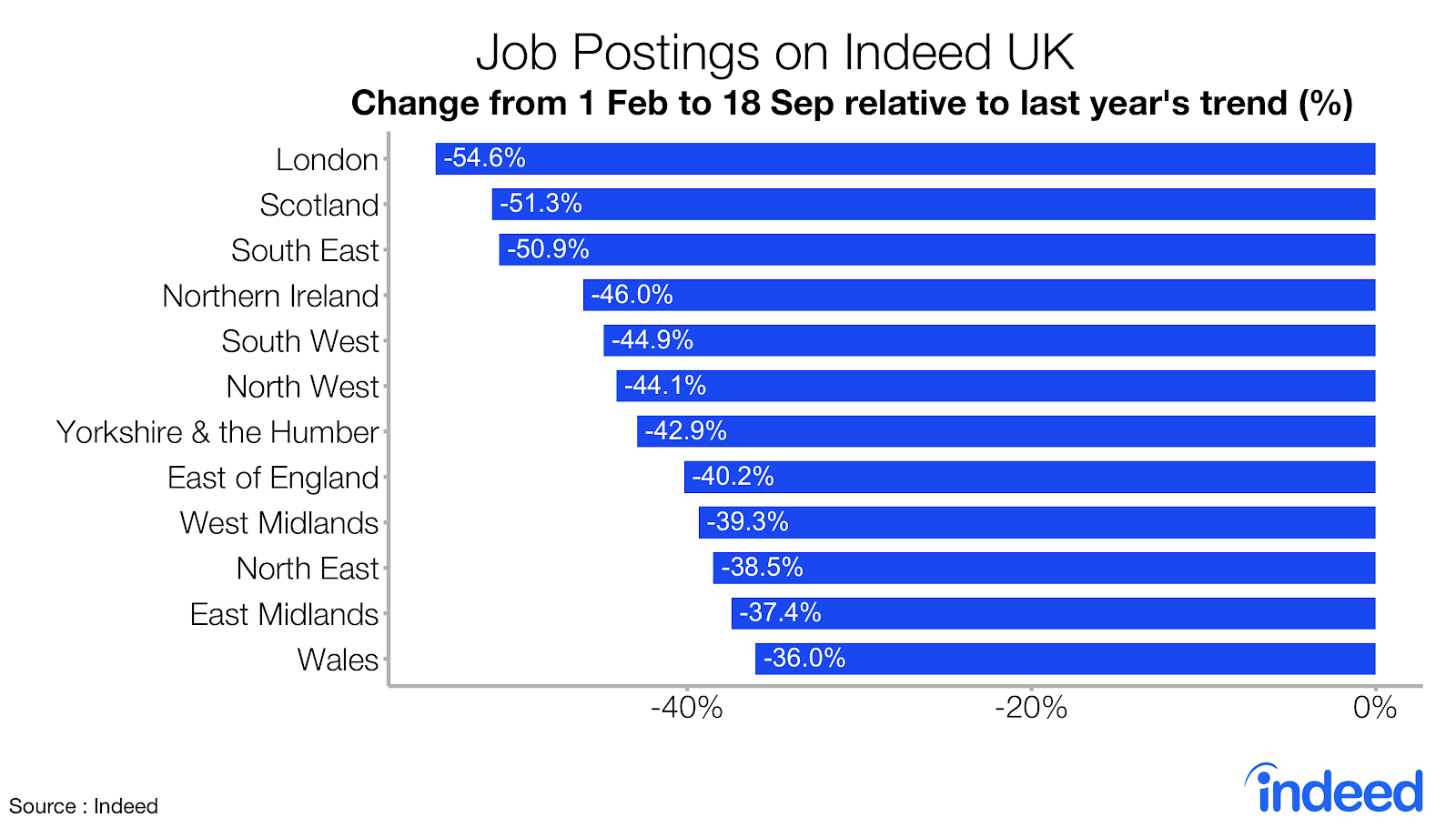 Indeed’s findings come as estate agents report a spike in the number of Londoners looking to move out of the capital. But while that property trend is likely to be driven by some citydwellers’ desire to find a home with more space, Indeed’s data highlights a shift in where Londoners want to work, rather than live.

Four of the top five most popular destinations among Londoners looking for work outside the capital are counties adjoining London, with Essex accounting for one in 10 searches (10.3%)4.

The most popular destinations for Londoners seeking work outside the capital4

The popularity of the Home Counties suggests that while Londoners have broadened their horizons, many of those looking beyond the capital for their next job don’t want to go far.

The roles they’re searching for most commonly tend to be non-specialist jobs. The most popular are cleaner, customer service representative and warehouse worker, with the top five completed by retail assistant and sales assistant.

“The prolonged absence of commuters and tourists – and the spending they bring – from central London is weighing down the pace of job creation in the capital. Since the summer, job vacancies have been springing up faster outside London than in it.

“While London’s flagship financial and tech sectors are still recruiting, the types of job that Londoners are searching for most commonly outside London tend to be roles that were long abundant in the capital – from retail to cleaning work – but which are now scarcer.

“With fewer new job opportunities in the capital, many Londoners are casting their net wider in their search for work. Most interesting of all, most are looking for work in areas within commuting distance of London.

“This raises the prospect of a new type of worker – the reverse commuter who lives in London but travels out of the capital for work. London’s booming economy has been an engine of job creation and career progression for decades, but in the space of a few months the pandemic has shifted the dynamic between the capital and the areas in its orbit.”