Transport for London (TfL) and the London Fire Brigade (LFB) are reminding motorists not to stop in yellow box junctions to reduce the number of penalty charge notices issued and keep traffic flowing. Stopping in these boxes is illegal and could also cost the LFB vital time in responding to emergency incidents.

In 2017/18, 123,071 penalty charge notices were issued to motorists across London for stopping in yellow box junctions. The top locations were outside fire stations, with 16,707 motorists stopping outside Wandsworth Fire Station and 12,071 outside Homerton Fire Station.

TfL’s priority is keeping the road network moving as efficiently as possible and also wants to reduce the number of fines issued. Yellow box junctions are designed to keep junctions clear for through-traffic, to avoid congestion. They also keep road space free for emergency vehicles to respond to 999 calls, for buses to exit bus stations and also keep space free for people to cross the road safely.

“Stopping in a yellow box junction is illegal and can incur a fine, which we enforce as part of the traffic regulations on the capital’s Red Routes, with all revenue reinvested in the transport network. We would rather not issue fines to motorists for breaking the rules of the road and urge everyone to be mindful that these junctions are there for a very good reason.”

Tom George, Deputy Commissioner at London Fire Brigade, said: “Don’t block us in. If you are stopping in a yellow box junction outside a fire station, you are putting lives at risk by slowing down fire engines on their way to an emergency.

“I’d urge all road users to think of their actions when they see emergency vehicles traveling on blue lights. Consider the route a fire engine might need to take and if necessary, safely pull over if you see us approaching.” 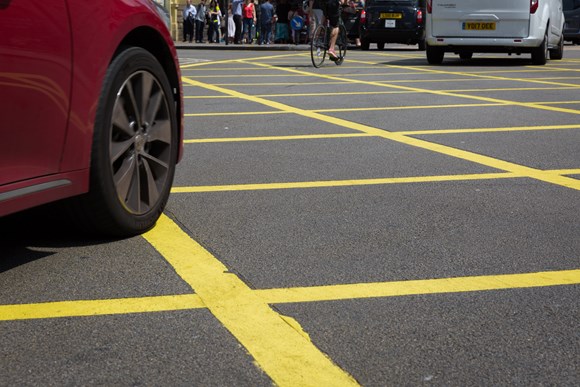 Yellow box junctions are indicated by criss-cross yellow lines painted on the road. They are usually found at the junction of two or more roads and occasionally at roundabouts or outside fire and ambulance stations. Motorists may enter a yellow box junction when the exit is clear and there is enough space on the other side of the junction for their vehicle to clear the box completely without stopping.

More than a third of all London’s traffic use TfL’s red routes and vehicles that block roads, drive in bus lanes, park incorrectly or make banned turns, not only cause inconvenience to road users, but create hazards, particularly for people walking and cycling. By keeping these main routes clear, road danger and congestion are reduced, ensuring that London remains an efficient, well-functioning city.

TfL reinvests any money received from any penalty charge notices back into London’s transport network for maintenance, reducing danger on the road and transforming the capital’s streets into more attractive, accessible and welcoming places, in line with the Mayor’s Transport Strategy.

As part of its Vision Zero approach to eliminate death and serious injury from London’s roads, TfL is working closely with the emergency services. Ensuring that first responders can get to incidents quickly and safely is an important part of how TfL manages the road network.